The Otto is arguably R.Riveter’s most popular and iconic handbag. With an adjustable crossbody strap and functional handles, the Otto is an incredible bag for any occasion. Wear it on your shoulder with a shortened strap, carry it by the handles, or sling it across your body as a hands-free crossbody bag!

The Otto was named after one of the original Rosie the Riveter’s, Mrs. Elinor Otto. When WWII began and men were pulled away from their jobs to serve their country, Mrs. Otto was one of the nearly 6 million women who went to work to keep the country moving forward. She worked until 2014 when she retired from Boeing, where she was responsible for working on every single C-17 plane that went through the plant.


The Otto is a special handbag. Not only does it pay homage to an incredible woman who helped pave the way for 21st century working women, it also empowers military spouses today. Each part and piece of the Otto is handcrafted by military spouses across the country, allowing them to earn flexible, mobile income in a transient life with their soldier. 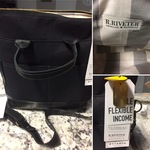